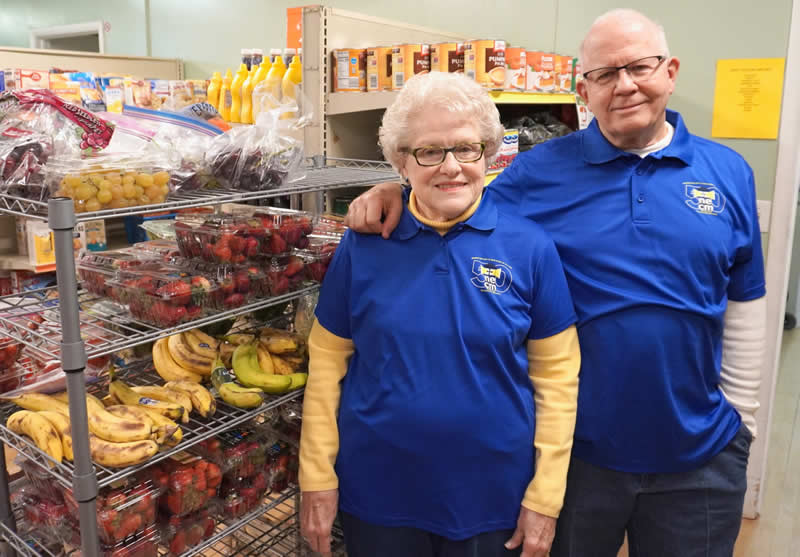 Gloria and Dave Figg look forward to volunteering at NECM every week. Their church, Berkley Hills Church, has an extensive outreach program and the Figgs were looking for a volunteer opportunity They knew NECM Executive Director Laura Castle and found NECM a good place to be for them.

Gloria and Dave are part of the Tuesday crew at NECM’s food pantry and have been joined over their 10 years of volunteering by other couples from Berkley Hills. The couple have lifelong connections to the NE Grand Rapids as graduates of Creston High School, making NECM a natural choice for volunteering.

“We wanted something that we can do together,” Gloria said. “We want to reach out and help people in our area. It’s what we’re supposed to do as Christians.”

Dave is a current member of NECM’s Board of Directors and has served for more than seven years. Board members go over budget numbers and oversee the details of running NECM that runs on volunteers and donations. Dave is impressed by how the whole ministry accomplishes so much with a small annual budget.

With prompting by Gloria and Dave, a couple of years ago Laura Castle made a connection with Aldi’s at Knapp’s Corner in Grand Rapids. Now the Figgs start every Tuesday morning with a stop at Aldi to pick up excess fruits and vegetables. The Figgs and other volunteers sort through strawberries, apples, peaches, peppers and other fruits and vegetables before they are loaded in three vehicles and delivered to NECM’s food pantry. The donations are reported to Feeding America and Aldi receives credit for its donations. Produce not used by NECM go to Matthew’s House Ministry on 7th Street NW in Grand Rapids.

Gloria said the addition of fresh produce to the food pantry has helped tremendously, adding variety and nutrition to offered selections. Across the street from Aldi, Panera Bread also now donates boxes of day-old bread and baked goods.

The Figgs also serve as mentor for three couples at their church that have become like family to them. They are a listening ear for the couples — they pray, travel and share meals with them, and keep in communication with them to see what their needs are.

“We text and call and get together. It’s nice that they know they have an older couple interested in them,” said Gloria, noting some of the couples are not from the area.

Dave is a retired surgeon, and Gloria a retired teacher. Dave graduated from medical school at the University of Michigan where Gloria earned her master’s degree. Their son Ryan Figg is a colorectal surgeon and daughter Sharla Ulstad, an obstetrician-gynecologist. Their kids, spouses and seven grandchildren all live in the area. The Figgs enjoy hosting friends and family at their summer home in Ludington. Dave also enjoys salmon fishing on his boat.

The couple have a passion for travel. They spent three years as missionaries in Rwanda and have traveled to 37 countries. A Baltic cruise in May will add six more countries to their list of countries visited.

“NECM is entirely grateful for the wonderful support Dave and Gloria have been to those we serve through the ministry,” said Laura Castle, NECM executive director.

Support Us With Your Shopping

When shopping at Amazon simply go to smile.amazon.com and under “pick your own charitable organization” type in North End Community Ministry

We accept VISA, MC, AMX, and Discover
Reference ID can be left blank or used to direct your donation